Why the world needs independent shops now more than ever 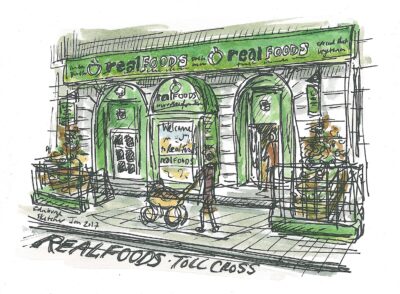 The fragility of our highly centralised food distribution has become a talking point during the UK’s COVID-19 response. Here at Real Foods we believe the world needs independent shops now more than ever. Now’s the time to look at the benefits of independent shops compared with supermarkets.

Aisles upon aisles of bright lights. A constant hum. Flashy promotions at every corner. All you wanted was some oat milk, and yet you’re trapped in a labyrinth. Welcome to the supermarket.

Prince Phillip said of supermarkets back in 2009: “Villages used to have to be more or less self-sufficient: they had a butcher, a baker, a shoemaker. Now that has all gone because of the way retailing is concentrated in big centres and multi-stores.”

Our one-stop shops have become the norm for Britain. In addition to the out-of-town superstores – a stark and sprawling monolith in an ocean of car parking space – we have got used to our express shops dotted around each and every neighbourhood.

As the world focuses on resilience and togetherness, there’s a growing throng that believes the world needs independent shops now more than ever.

Back in their heyday supermarkets were considered a mark of quality: you could be reassured that no worm would be found in your apple. Standards have changed however – nowadays you are just as likely to find better quality products from a specialist independent retailer like Real Foods.

Supermarkets were created for convenience. The one-stop-shop was a time-saver for the consumer and offered at least a perceived sense of greater choice. Why not purchase a pair of sandals or a new TV at the same time as your pint of milk?

A 2011 report by ResPublica highlighted that supermarkets now sell 97% of our food, of which the Big Four (Tesco, Sainsbury’s, Asda and Morrison) selling a whopping 76%. Unfortunately, has led to a major decline – 90% since the 1950s – in specialised stores, such as family-run greengrocers and independent bakeries.

Community spirit and the shopping experience

What makes your town different from the next? Is it that quirky shop on the corner? The friendly greengrocer who knows you by name? Products made with time-honoured methods that are unique to your area?

Each local culture is shaped as much by its shops and local produce as it is by its people. However, in supermarkets, Scottish people complained they couldn’t buy Scottish magazine titles, due to the rigid nature of supermarket distribution, as highlighted by the thinktank New Economics Foundation (nef) in its 2004 report, Clone Town Britain.

Independent shops promote local culture for the simple reason that they are right on our doorstep, in turn promoting community camaraderie within our neighbourhood.

While we may enjoy occasional anonymity while choosing our carrots, it is a positive experience and arguably one that invokes a sense of belonging when we have conversations in our local shops.

Diversity in the high street

Variety may be the proverbial spice of life but uniformity becomes a common theme when we stop supporting local businesses.

Research from Stirling University suggests dominant supermarkets are responsible for diminishing diversity in our high street.

Similarly, in a 2009 Guardian article, George Monbiot highlighted a government-commissioned study that found large supermarkets built on the edge of a town centre would negatively impact other food shops, losing between 13 and 50% of their trade. These large retailers threaten the high street, especially if the supermarket in question is “disproportionately large compared with the size of the centre”.

Independent shops put their profits back into the communities they serve, compared with nef statistics showing around 90% of supermarket and chain store spending is immediately removed from the local economy.

Creating more and better-quality job boosts local growth. Local street markets generate twice as many jobs than large supermarkets. This is because local businesses are more likely to use local services and require a greater variety of skilled and unskilled labour.

You’re never going to get as many varieties of fruit at a supermarket. Why? Because to keep the purchasing and distribution simple, large retail chains opt for simplicity.

Supermarkets choose a specific variety of produce not on appearance or taste but its ability to travel, as unveiled by Monbiot. To the Big Four, it doesn’t matter if it comes from Scotland, Spain or Sri Lanka, as long as it can travel well. Supermarkets prefer to source produce from overseas as the growing seasons are shorter and labour is cheaper.

While supermarkets try to champion local suppliers, this is a challenge due to the supermarket distribution model. For example, milk will be driven halfway across the country to a distribution centre before it is then dispersed to its stores. This means that even a supplier that appears local might have to send products on an unnecessary journey.

The UK’s demand for organic produce is rising by 4.5% each year, and independent stores like Real Foods are perfectly placed to support smaller organic farmers.

Small businesses can’t easily work within the complex nature of national supermarket chains. Supermarkets rely on economies of scale, and local suppliers often have volumes just too small to be considered.

Unlike the retail giants who dictate everything from appearance and packaging to pricing of its local suppliers, independent shops offer great flexibility. Packaging and shelf-life are less of a concern when it’s sourced from just down the road.

The resilience of independent shops vs. supermarkets

During our ongoing COVID-19 pandemic you might notice that supermarkets struggle to keep shelves stocked – and we’re not just talking toilet paper. This is not the first time we have seen the fragility of highly centralised supply chains; the fuel refinery protests of 2000 highlighted that we are all just nine meals away from anarchy.

Conversely, supply chains of independent shops are less fragile than we initially anticipated. When shortages occurred, the independent shopkeeper could literally buy from anywhere to keep shelves filled, as the BBC reported.

Independent retailers can support small, local producers and farmers without the complexity of corporate distribution regulations. During these times of insecurity, the world needs independent shops now more than ever.

It’s usually easy to walk or cycle to our local shops, but most of our large supermarkets are out of town.

How local is your local shop?

Government statistics show that 20% of all our car trips are for shopping, with the average trip time taking 17 minutes.  Aside from the price of fuel to get there, there are other hidden costs of travelling to a supermarket, such as traffic emissions, noise, accidents, and congestion.

Living in a food desert is becoming a common reality for many Brits. These are places that have limited access to affordable and nutritious food. Over one million people in the UK live in a food desert, where poverty, poor public transport and a dearth of grocery shops converge.

One subject of a study by the Social Market Foundation and Kellogs highlighted that getting to a superstore could deplete her food budget and that a “taxi is a meal”.

Our perception that miniature versions of chain convenience stores are more affordable than independent shops and local markets is skewed. Research shows the reverse – you will end up paying around 10pence more for every £1 spent at these shops compared to their larger namesakes and, according to nef, street markets, tend to sell products at 50% less the cost of supermarkets.

You’ll be amazed at the competitive prices found in independent shops – and that’s even before you look at the provenance and quality of the produce.

Shopping in a climate crisis

The global pandemic has forced us all to slow down and think. Priorities have changed and recent polls show that the British public are ready for a faster-acting response to climate change.

Perhaps we’re ready to look at how we do our grocery shopping. The buy more models of the supermarket – the 2-for-1 or BOGOF deals – are tempting but often wasteful offers.

Every year, a massive 260,000 tonnes of food waste is generated by retailers and the food industry is responsible for one third of greenhouse gas emissions. The Big Four of retail try their best with new sustainable initiatives to mitigate climate change.

One average sized superstore matches the same carbon dioxide emissions as over 60 corner shops and greengrocers.

Unfortunately, more often than not, these initiatives fizzle out. For example, after announcing a carbon labelling pledge in 2007, Tesco dropped the scheme five years on. Unless there is some radical change, it is unlikely that supermarkets can ever live up to their green promises.

George Monbiot argues for online shopping systems in his book Heat: How We Can Stop the Planet Burning, after highlighting that supermarket buildings are inefficient, chugging up energy and an inappropriate use of land. This was verified by a 2002 study by Sheffield Hallam University which showed that new superstores are energy inefficient.

Independent shops like Real Foods can serve the community with what its needs, in a far improved sustainable package.

As our post-lockdown future emerges, small retailers that support local food production and short distribution methods and guarantee resilience will be our obvious consumer choice.

Forum for the Future reported that the COVID-19 pandemic has increased Community Supported Agriculture (CSA) across the globe. Meanwhile more grassroots initiatives that promote small-scale food suppliers that sell directly to the public have emerged, such as the South-West of England’s Farms to Feed Us database.

There’s both hope and power in where you shop. Shopping at your local independent store is a good, smart choice. After all, don’t we all want better, local, and real food provided to us with a healthy dose of community spirit?

Sketches produced by The Edinburgh Sketcher